By Russell Knight on 18th November 2019 in Testimonials

Never in a million years did I think I would find myself using a personal trainer. I don’t even like exercise; however, the extra weight I blame on two babies is refusing to disappear all by itself, so when Russell challenged me to two months of training, I couldn’t think of a good enough excuse not to. When he suggested we aim for a four mile run, I began to wonder if I’d done the right thing. It was at my first session that I realised the target of a four mile run wasn’t going to be something theoretical that might happen at the end of two months. Russell actually intended me to take part in the Oldbury Fun Run, just four weeks away. I hadn’t run in public since school, and was quite sure he had lost his marbles.

There were many days when, left to my own devices, I would never have made it to the gym in Thornbury. It’s so easy to come up with excuses, but when you’ve made an appointment, you force yourself to go, and once I’d started the session, I was always glad I’d made the effort. An hour personal training with Russell goes much faster than an hour on your own, and you feel terribly virtuous when it’s over. Russell didn’t push me further than I wanted or was able to go, it was simply that stubbornness kicks in when there’s someone recording your progress. His feedback and encouragement, showing me the progress I was making, was a big incentive too. When you know you’re getting better, and the numbers show it, you do want to carry on.

So the day of the Oldbury Fun Run arrived and I was more nervous than I had expected but Russell was there to reassure me and I prepared myself mentally for the rather daunting task ahead of me. It wasn’t until I crossed the final mile marker that I realised there was a chance I might actually complete this, and began to relax and enjoy myself. Crossing the line was a huge surprise and relief. Just a few weeks previously I had thought this would be impossible, but here I was, and it was all credit to Russell. I started to feel the benefits of Russell’s workouts in my daily life too; little things that had been challenging before, such as the uphill bike ride to our local shop, were suddenly much easier.

If you would like to book a free consultation with one of our personal trainers, leave your details below and we’ll be in touch.

View all posts by Russell Knight → 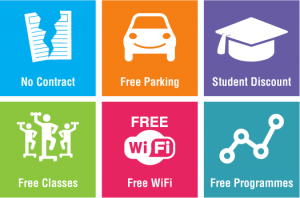